Sometimes it's best to be invested and hold tight, not jumping in-and-out of the market as the calls for a bear market mount. The market this year has been one of such times, and investors who are staying the course are getting rewarded. Sitting on hands is one of the hardest things for an investor to do, as Warren Buffett has noted.

Seasoned market prognosticators and a rising number of writers on this medium have been publishing on the imminent demise of the bull market for many months, as highlighted in our earlier article The Relentless Market and Missed Calls. They have not been right thus far, but that doesn't mean they will never be right. But we feel they will have to wait a little longer.

In our prior market outlook writings, including Market Outlook 2017, we have emphasized what we believe are fundamental underpinnings supporting a stock market - Earnings, Economy and Monetary Policy.

Earnings growth has been strong, with the first quarter earnings growth of 14% for S&P 500 companies showing momentum that has not been witnessed since 2011 - over 5 years ago.

The Economy remains steady at around 2% GDP growth level, though recent economic reports, particularly on retail sales, have been less than robust.

However, on the Federal Reserve's monetary policy front, a material change has occurred over the past month. Recessions typically occur during a period of interest rate tightenings when imbalances in the economy are not read in a timely manner to align with policy adjustments thus precipitating a slowdown. A rapid rate of tightening has more than once sent an economy into a recession.

In the mid-June meeting, the Federal Open Markets Committee (FOMC) kept its tightening pace by raising interest rates to 1%-1.25% band and projecting one more increase this year. This was an expected course of action. In addition, the Committee provided more specifics in reducing the size of the balance sheet, which holds Treasuries, agency debt, and mortgage-backed securities, resulting from the gargantuan effort to boost the economy in the aftermath of The Great Recession. The balance sheet normalization program is expected to begin sometime later in 2017, contingent on economic performance, with a planned reduction of up to $10 billion monthly during the first 3-month period. The cap will increase in increments every 3-months, till it reaches a drawdown of $50 billion monthly, at which time the cap remains constant till the Federal Reserve deems it is time for a change or termination of the program. The normalization is achieved through not reinvesting the principal that is paid back on its holdings.

A balance sheet normalization is essential at some point to begin the rollback of the $3+ trillion that was added to the Federal Reserve's balance sheet as part of quantitative easings.

The normalization program drains the cash from the monetary system and has the effect of a tightening and pushing yields higher. In a way, one can view this program as an additional interest rate increase each year.

The question is will the Federal Reserve's tightening on two fronts - monetary policy and money supply - begin to plant the seeds of a slowdown?

While the previous question is indeed a difficult one to answer, we do believe that if the Federal Reserve this year begins and maintains its balance sheet normalization program as outlined, then it will be forced to moderate its pace of interest rate increases in 2018. Based on the current data, not doing so will elevate the risk of an economic slowdown.

There is no reason to believe that the Federal Reserve, which has shown an open and pragmatic approach to managing monetary policy in this cycle, will not readjust its course in a timely manner in the face of potential threats to the economy.

No compelling argument exists for the Federal Reserve policy to become more hawkish at this point. Overlaying a money supply reduction on the interest rate course already charted can be considered hawkish, given the backdrop of declining inflation statistics.

The principal reason for the Federal Reserve to moderate its rate-hike policy will be that the world still remains exposed to deflationary forces even though they may not be as pronounced as around 2015 timeframe.

The slowdown in inflation is being witnessed in the core Consumer Price Index (CPI), which excludes volatile food and energy costs, that fell to 1.7% in May from 2.3% in January 2017. The decline is being manifested even in the Federal Reserve's preferred inflationary gauge, the Personal Consumption Expenditure (PCE) Deflator, which in January 2017 met the Fed's goal of a 2% rise, the first time since 2012, but only to slow down thereafter rising only 1.7% in April.

Timid inflationary data is not just a US phenomena. Across all major economies, the similarly restrained and moderating inflation data is becoming typical.

Even though conditions are in place for high inflation, the data is going the other way. Perplexing!

The inflation retreat is all the more remarkable when one considers that the major global economic blocs are growing more in sync today, then at any time in the past nearly 10 years. Thus, in the normal course of events, such uniform growth should be exerting greater pressure on resources. But commodity prices are falling, and it is not just Oil. 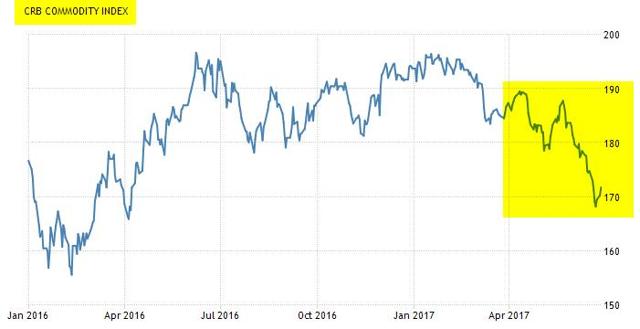 There is a wave of deflationary forces that continue to be unleashed because of improving economic efficiency. Technology is undermining the typical relationship of a low unemployment rate leading to wage growth and consequently inflation. The Phillipe Curve which quantifies the relationship between an economy's unemployment rate and the commensurate rise in wages and inflation is still important and relevant but perhaps somewhat handicapped in capturing the immense technology-driven efficiencies and severe price pressures to survive, which maintains pressure on businesses and wages. Technology appears to have meaningfully depressed the inflection point at which wage inflation may respond forcefully to low unemployment. Perhaps it is The Great Recession that has unhinged past relationships and recast traditional inflection points. Expectations for inflation, which play a key role in economic behavior, remain well-anchored amongst businesses and consumers.

A typical example of technology's impact is the restructuring of the retail industry, where giant storefronts like WalMart (WMT), Costco (COST), and Target (TGT) are competing even more so on prices thanks to online technology-driven retailers like Amazon (AMZN). Another example is the Cloud, which by its very nature is a deflationary influence. Once again Amazon, along with Microsoft (MSFT), Google (GOOG) and Facebook (FB) and many others, are disrupting costlier ways of doing business.

Global labour markets have seen profound changes over the past decades, with significant implications for wage and price formation. As labour market slack diminishes, wage growth is expected to rise. But wage demands have lagged the cycle more than in the past. Rather than a purely cyclical phenomenon, this wage behaviour appears to reflect long-term forces that are reshaping the global economy. The question for many central banks is whether these developments have so weakened the relationship between inflation and labour market slack that the recent tightening of labour markets poses little threat of an inflation overshoot."

The bond market yields are already reflecting the low inflation scenario and not aligning with another projected rate increase to 125-150 basis point this year by the Federal Reserve, and assigning a 50-50 chance of such an increase. 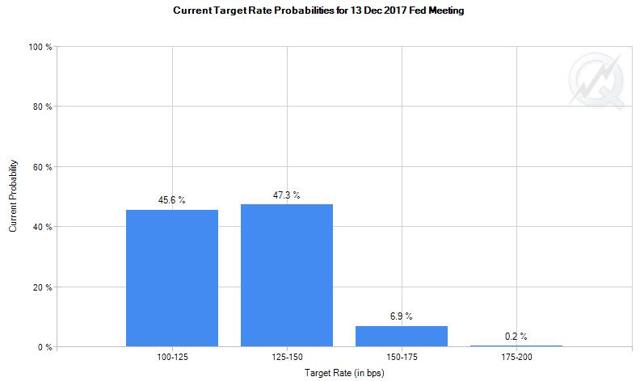 The inflation slowdown and the possibility of over-hiking interest rates are already figuring prominently in the minds of two voting members on the FOMC  - Governors Neil Kashkari and Charles Evans. The rest of the Committee also realizes the issue, including Chair of the Board of Governors Janet Yellen who is reposing faith at this time in the long-held theory of labor market improvements feeding into wages and inflation.

It is our belief the Federal Reserve will have to be more measured and cautious in its interest rate hikes, and we suspect will have to revise downwards the number of increases projected for 2018, particularly if the balance sheet normalization begins later in 2017. In our opinion, if the inflation data remains highly benign, a reasonable possibility can be the beginning of the balance sheet normalization process later in 2017, offset by the deferment of the final rate increase for this year into 2018.

We believe the three constructs - Earnings, Economy and Monetary Policy - still remain supportive and accommodative of stock market valuation. However, the risk of a more aggressive monetary policy will have to be monitored for the second-half of the year.

In addition, as we pointed out in our Market Outlook 2017 article in January, the risk of unrealized or delayed policy expectations will be more pronounced during the second-half of 2017. Presently such a risk remains anchored for the near future as the market sees infrastructure and tax reform bills lined up for late Summer and Fall.

The S&P 500 and Nasdaq continue to make multiple new highs. As we head into the earnings season for the second quarter, the market will most likely pause and consolidate while it awaits earnings. The earnings growth expectation for S&P 500 companies is 6.5%, as per Factset,

We remain invested at this time in our Prudent Biotech Portfolio, which was up 13% compared to 8% rise for the benchmark IBB as of June 1, and in our Graycell Small Cap Portfolio, which was also up 13% compared to benchmark Russell 2000 rise of 1% for the same period. The biotechnology sector has finally risen above its trading range and looks well-positioned for further gains after some consolidation. In our series of biotechnology sector articles, including the most recent one Biotech's Best Chance Gets Even Better, we outlined the rationale for an upbeat biotech performance driven by clinical successes and policy clarity. Some of the portfolio ideas we noted remain still relevant in the biotech and small cap space.