The stock market is unpredictable and volatile and investors are being administered a high dosage of these nerve-wracking reminders during 2018. The high volatility this year appears to feel like a punishment meted out for the low-volatility indulgences of a mellow 2017 when stock market volatility dipped even lower than bonds for the first time ever.

Short-term time frames magnify the volatility, adding to investor stress and creating a strong urge to be active in the markets. In the end, over-activity in a portfolio is detrimental to its performance. Considering the number of 1% daily swings experienced since February, it may come as a surprise to learn that the key indexes are basically neutral for the year.

Are we approaching the end of a primary uptrend and a change to a downtrend?

In our opinion, it won’t be the usual suspects – interest rates or economic slowdown – to derail the market. If anything can derail this market at this point into a deeper correction is a systemic shock, which to our mind is no longer as low a probability event as it was earlier in the year.

The market is trying to discover a direction from its 3-month consolidation, within what still remains a primary uptrend. The next 4 weeks will be quite riveting as the market will most likely resolve the trading range that it is presently operating within.

Can the market muster sufficient momentum on the back of new data and continued earnings momentum to push through and record new highs, or will it succumb and make new lows indicating a shift in at least the near-term trend?

It’s a hard question, but the evidence at this point continues supporting a tilt towards risk-taking.

Interest rates concerns are occupying center stage as shorter-term yields have persistently risen, reflecting a shift in expectations towards a more aggressive monetary policy beyond the two remaining planned rate hikes for this year. Inflation touched the Federal Reserve 2% goal for the first time in a year, reinforcing concerns that the projected path may have to become steeper.

At the same time, the longer end of the yield curve, 10-to-30-year, has begun to droop driven by receding expectations for continued economic growth.

As a yield inversion, where the short-term yields are higher than longer-term, is a fairly robust predictor of recessions, the narrowing spread has investors worried. The chart below shows the spreads between 5-and-30 years as well as 2-and-10 years. Both are dipping towards 0, the dotted red line. 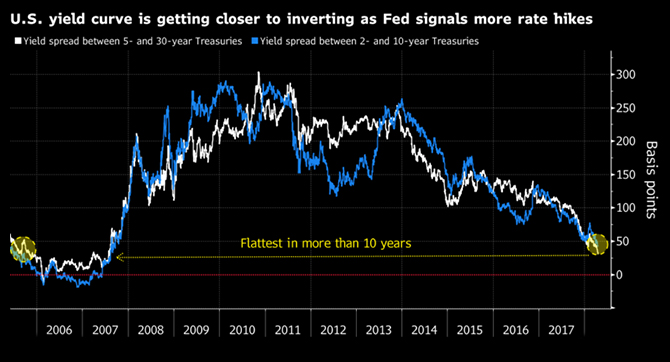 Incidentally, even though the yield inversion is a good predictor of recession, the economic slowdown arrives with a substantial lag of nearly 12 to 24 months. The post two years returns of the S&P 500 immediately after the inversion are positive for the most part, due to a late cycle equity boost. So the inversion should not by itself be a reason for investors to rush for the exits, and, as we mentioned, the likelihood of an inversion occurring contributes towards a more restrained and softer approach by the Federal Reserve, even if PCE inflation moves above the 2% target.

In the meantime, earnings have been strong, to put it mildly, for the first quarter. Heading into the earnings season, the expected earnings growth rate for S&P 500 companies in the first quarter was 18%, which would be the highest since the first quarter of 2011. With over 50% of the S&P 500 companies reporting earnings, the earnings growth rate thus far is closer to 24%, as per Factset. The same outperformance is being evidenced in the revenue growth, which is tracking higher than the expectations. Interestingly, more companies are reporting ahead of expectations compared to the five-year averages than at any time before, since Factset began tracking this data in 2008. Nearly 79% of the companies thus far have reported earnings ahead of expectations, and 74% ahead of sales expectations. The S&P 500 is trading at 16x projected 2018 earnings, around the 5-year average.

In our opinion, these earnings and the ensuing guidance are strong enough for the market to record new highs if it weren't for the political circus and trade policy uncertainty.

One of the reasons the stock market has ground to a halt is because of the trade tariff disputes, which are beginning to escalate and can lead to trade wars. The conclusion last week of trade talks with China only succeeded in bringing into focus the wide gulf that exists between the US demands and the Chinese position. There were no deals.

And if there are no deals, it returns the President to tweet again about tariffs and further raise stakes, all with the potential of jolting markets. At some point, if the trade friction is allowed to continue with tit-for-tat policies, the uncertainty, and ensuing tariff penalties has the potential to impact the economy adversely.

Furthermore, there is the threat of political turmoil as the Mueller investigation continues, which can lead to further indictments and/or lead to the firings of Mueller or the Assistant Attorney General. This political risk has continued to rise as the year has progressed, and if we are to encounter any such eventuality it can lead to potential turmoil in Congress. The market hates such uncertainty and the situation can deteriorate rapidly into a deeper Correction. We weigh this risk ahead of geopolitical issues with North Korea and Iran.

The political crisis risk is important for investors to keep in mind, and in our opinion perhaps the only thing on the horizon that can capitulate a market with strong earnings and economic support. It is our expectation that the potential risk from an aggressive Federal Reserve tightening remains well-anchored.

It's always useful to remember that in a crisis, correlations go to 1 as industries and asset classes correct in unison. The political risk, as it continues to climb, has to be monitored.

As volatility has engulfed the stock market, small cap stocks have stood out for their resilience. Typically, a shrinkage of risk appetite leads to a reduction in small cap exposure. Within the current climate, the small caps are keeping pace with the larger cap companies. The Nasdaq (QQQ) and S&P 500 (SPY) indexes in 2018 have a neutral 0% return as of April 1, while the Russell 2000 (IWM) small cap index is down -1%. For the same period, the Graycell Small Cap Portfolio is up +13% for the year.

Small cap companies have a more direct and concentrated exposure to the fortunes of the US economy, relative to larger companies with more diversified revenues across national boundaries. The strong US economy has consequently resulted in an earnings gush for small cap companies.

In addition, small cap stocks are relatively less exposed to trade-related issues as larger cap stocks with substantial international presence and export revenues. Furthermore, the surging dollar has limited impact on small cap companies, while adversely impacting international earnings of larger cap companies.
Even the highly speculative and volatile biotech small caps have performed quite well with the S&P Biotechnology Index (XBI) up +3% for the year as of April 1, while the larger cap Nasdaq Biotechnology Index (IBB) down -3%. The small-and-midcap oriented Prudent Biotech Portfolio is up +18% over the same period.

The underlying appetite for risk suggests that as the market sentiment turns positive, small caps will benefit disproportionately and lead major indexes higher. It appears prudent to consider a portfolio exposure to small caps, which even in this volatile market are continuing to provide opportunities for investment gains.